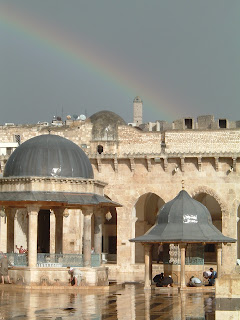 The only day it rained during our entire trip was our day in and around Aleppo on October 15. We got lucky, though. Our day started at the Citadel of Aleppo, then the Museum afterwards. As we were leaving the museum for St. Simeon, it started to rain. We had decided to stop and get some “pizzas” for lunch to take on the way and eat while we were at St. Simeon. It rained all the way there and and while we ate our lunch in the bus, but as soon as we were done, the rain stopped! We were able to visit the site where St. Simeon the Stylite, a Christian ascetic, settled in 412. He lived for nearly 40 years on the top of a column, surrounded by pilgrims. The surrounding basilica and baptistry are on a hill top overlooking the surrounding countryside and you can see Turkey to the north. As soon as our visit was over and we were heading back to Aleppo in the bus, the rain started again!

Once back in Aleppo we went to visit the Ommayad Mosque and the souk with its miles and miles of covered passageways, located at the foot of the citadel. The souk is ancient, having been in use for centuries because of Aleppo’s important location on the trade routes between east and west. You can spend days and days exploring all of the souk, and you can buy everything from kitchen utensils, fabrics, clothing, gold, souvenirs, soap, spices, nuts, sweets, and more. It is an asault on your senses, but in a good way- the odors of the spices and the sounds of the merchants moving more goods to their shops on the backs of donkeys, colors of all types of fabrics. The souk is a world of its own. Once inside, you leave the city behind, and it is very easy to get lost. I don’t know if the is a map of the layout of the souk, but I doubt it would do any good. But half the fun and adventure of visiting the souk is to emerse yourself if this age-old insitution of trade and commerce, and forget about what might be going on outside.