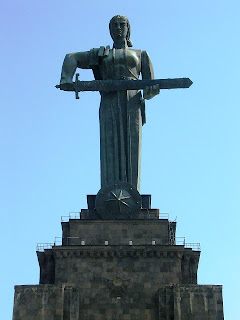 One of the many highlights included visiting the Mother of Armenia monument at Victory Park in Yerevan, Armenia.  It was erected in 1967 to replace a statue of Joseph Stalin and is made entirely of copper.  This pride of Armenia symbolizes peace through strength and stands tall with a sword and shield, overlooking the city.  Our group picture is taken here, with a view of the capital in the background (one tourist is not pictured). 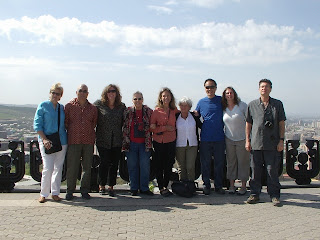 Our next stop was a visit to the Tsitsernakaberd Armenian Genocide memorial, which was completed in 1965.  This visit was exceptional because the national day of remembrance for the holocaust happened during our time there.  Thousands rallied at the site during the holiday. 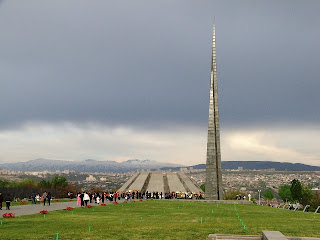 Armenians continued to visit the site throughout the week.  The site was beautiful decorated, notably with a tall building and a circular monument next to it.  An eternal flame was installed at the very center of the circular monument, in remembrance of the 1.5 million victims who died in the Armenian genocide.  As we got closer, our senses were overcome by the strong floral aroma from the circular wall of flowers. 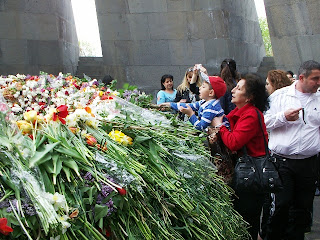 Many visited and paid their respects with prayers and pictures.  Many parents lifted their children to lay flowers and see the eternal flame.  I tip-toed just high enough to take a picture of the flame.  This was both tragic and beautiful but an important part of learning about Armenia’s history. 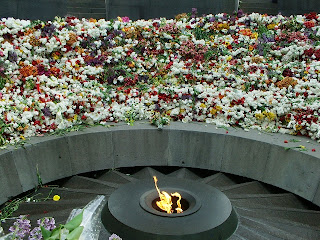 Caravan Serai’s unique combination of tour experience, knowledgeable tour guides, and well-designed itineraries really came together to produce a great tour.  I’d recommend this tour for anyone who has a thirst for culture, history, and good food!
previous
Traveling and Your Money - FAQ's
next
The Caucasus: Azerbaijan, Georgia and Armenia