This post was written by Rita, who spent many years living in Aleppo. 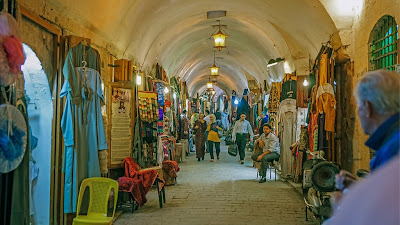 This is the souk I remember in Aleppo.  When I live there I was in this place daily for my regular shopping.  I would go and sit with the merchants and talk to them and just have a great time and also talk to the tourist as they were coming in.  During those days they were mostly British, French, and Italian, and only a few Americans.  Then after I moved from Aleppo and came back to the US and opened Caravan-Serai Tours I would take people on the tours to one of my favorite places – the souk – to get their olive oil soaps and their spices and then some other things that they wanted.  This was not a tourist market this was a market that the locals would use so you saw all different kinds of people in all different modes of attire. I have talked to my spice man who I used for over 20 years and he is safe and at home with his family, but his shop is no longer there.  This was a shop that was owned by his great-great-grandfather and was passed down through the family.  This was a man that would tell me not to put the cinnamon next to the pepper since it would drink the smell away and it would be overpowered by the cinnamon – do not put your dry mint next to your saffron since everything will then smell like mint, etc, etc.  This was a part of my life and history so you can imagine what he is going through and what the Syrian people are going through that were so proud of their city.
The souk now has been burned by both the rebel forces and the military.  The rebels had taken refuge inside the souk and then the firing started between the different groups. The reports are stating about 1500 shops have been burned, since the doors that the shop keepers had were all made of wood. The market dates back about 2500 years ago.  It stood up to all kinds of foreign invasions over the centuries, earthquakes, but not the powerful tools of war of the 21st century.
I talked to Faez in Aleppo to see how they were all doing, he said “how do you think we are doing- we are listening to the news ad hearing what they have done to the old city. The destruction of one of the Old World Heritage Sites is something hard for us to accept.  We have 7 different Old Heritage Sites in this area and all have taken some sort of damage.”  I said, “I know, and I want to cry – what can we do?” He says to tell people to talk to their government officials and try and get this to stop. Get the foreign soldiers out of the country.  Let just the Syrians handle this.  The foreign soldiers and the others that are trying to help are not helping.  We have foreign mercenaries that have nothing to lose by burning these ruins and raping and abusing the children- this is a war and they are being paid.
We need to get the different sides to sit and talk and negotiate peace- this is something that can’t keep going on – a solution is needed immediately. 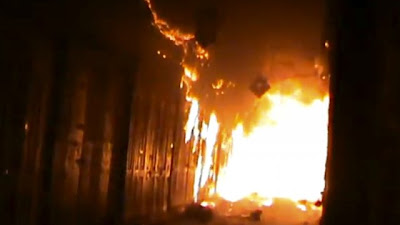 This is what the souk is looking like now.  Syria is in need of foreign intervention.
I also, talked to Alaa in Damascus today and he says it is relatively ok there – way better than in Aleppo. His kids are going to school and the businesses are open, but that is for now.
You can see that both the government and the rebels are going from one area and destroying that and then moving on.  We saw that in Homs and in Hama that are pretty much ghost towns at this point.  We can’t say this will be happening to Aleppo.  The museum in Palmyra has been destroyed and the artifacts have been stolen.  For a lot of you that used to travel with us to Syria I have been told that the young men that would sell us the jewelry, tablecloths, scarves etc. while at the sites are now gone and have joined the FSA.  Some have taken their families across the border to Jordan, walking thru the desert for days to get to the camps.  They do not have their documentation so they have to sneak into the country.
There is talk today that Jordan might have to close its borders to deal with the refugees they have if they are not able to get international aid for them. We are asking for your help.  Please forward these emails to friends and other people that you know that are worried or care for human lives and helping the children of the region.
We thank you for reading and listening.
~Rita
previous
Syrian Refugee Crisis
next
Iran-Susa Tour