Caravan-Serai Tours
Tuesday February 21
This morning we are taking a flight to Jeddah, it is the second largest city in the Kingdom.  The city is located on the shores of the Red Sea and it is nicknamed the Bride of the Red Sea.  The name Jeddah means grandmother in Arabic.  Jeddah is a major port city and the main gateway for Mecca.
The flight is interesting since a lot of the men on the flight are going to the Hajj dressed in their white sarong-like wraps that are the garments worn by the pilgrims.  The way the reservations were made no one knows who is who so once they get on the plane the men do not want to sit next to a woman and especially if she is western.  So we had people in the aisles as the poor airline employees were changing peoples’ seats to try and accommodate everyone and still get off on time.  They didn’t, and the plane was delayed about 15 minutes because of this.  Finally, we landed in Jeddah at 10:30am.  The temperature was very different from Hail – it was 26 C in the morning and got up to 33C as the day went on.  It is very hot and humid and also so much traffic.  Upon arrival we took the group for a drive thru to the city and then to our hotel – the Intercontinental – to rest up until the heat went down a bit and the shops will open.  Everything closed in the afternoon for prayers and the heat, and reopens at 4pm.

At check in the clerk, who is at the reception desk, had just come back from San Francisco and was so excited to register Americans into the hotel.  He is a Palestinian from Gaza and so very “gay” in his voice and mannerism.  We talked about this on the bus later on in the afternoon to explain the difference between the US and the Middle East and how it is handled and how it is perceived. 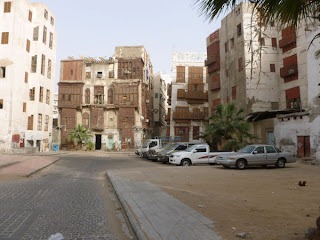 The hotel is great and so comfortable. All I want to do is sit in the shower all day long to keep cool, but that was not possible.  We went out later in the afternoon to the old city of Jeddah.  You see the old architecture, but you also see the mixture of people living here are mostly the foreign workers; Pakistanis, Indians, Bangleshi, Somalis, Afghani, etc.  This is different than what people think of Saudi Arabia and all the riches and fantasy palaces – these are the slums, the old buildings are dilapidated and need so much work on them.  The government gives these homes to the workers to stay in and help keep them up, but it doesn’t seem to be working that way. 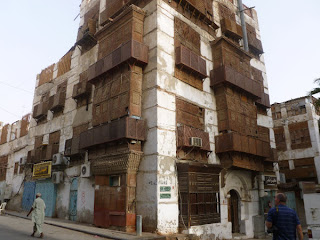 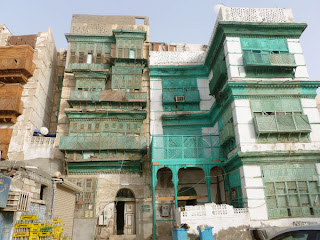 We walked thru the old city to get to the Balad market, which shows you how this was the trade route to all points – you can see it with all the different people and also the different items that are being sold and traded lots of incense being burned and the different smells as you walk thru are fabulous.  We drove by the corniche, but the streets are being worked on so we were not able to see all the sculptures that the corniche is know for, maybe tomorrow we will go on the other side and see if it is possible. 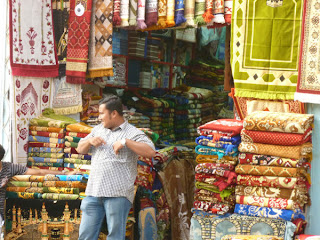 The group kept making comments as we were driving around about all the American chain restaurants here: TGI Fridays, Appleby’s, McDonalds, Chili’s, and on and on.  One of the clients asked the guide if he goes to these restaurants, he said no, Saudi food is better and his wife thinks this is not good for you to eat.
Tomorrow is our last day before everyone departs on their way home or on to another tour.
previous
Madain Saleh, Saudi Arabia
next
Our last day of the tour in Saudi Arabia