Sorry for the long delay in getting this posted! We have been busy at the office getting ready for our next tours coming up – Iran, the Caucasus, a private group going to Morocco, clients on independent tours to Turkey, Israel, Lebanon, and more. And Maha is in Egypt right now – I have a post from her that is going to be entered next! – Brenda
Monday March 12th
Today is the last day in Muscat and there is a lot to do and see before we leave.  We start out early this morning at 7:30am and go straight to the Big Mosque, built by his Royal Highness Sultan Qaboos.  It is about a 20 minute drive from our hotel.  The rules to go into the mosque are more restrictive than most.  Before getting on to the property of the mosque, women need to have their arms, legs, and hair completely covered.  No hair showing at all, no short sleeves – the sleeve of your shirt need to come down to your wrist.  Once you get to the door and the guard sees that hair or skin is showing he is able to turn you away.

The mosque is beautiful but not elaborately ornate.  The dome is made from gold and the marble has been brought in from Italy. The mosque can accommodate 20,000 people at one time.  The carpet was made in Iran and weighs over 27 tons, and covers the floor of the prayer room. The driver, who is Yemeni, said he prayed there only once since he kept looking around at everything that was there and you should not do that when praying. 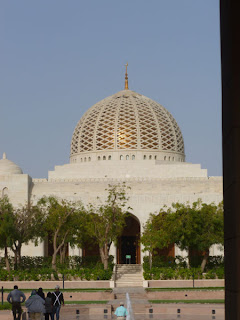 I had a discussion with some of the guides outside the mosque while the group toured around, asking them questions about marriage, etc.  There is no civil marriage in Oman, most Omanis do marry someone from their own country.  A couple of drivers knew Omanis that went out of the country and fell in love but with other Arabs in Morocco or Syria, etc.
They talked about watching TV and seeing the American stations and how families lived, and about divorce and the fighting and what happens to the kids.  This is the impression they have of us.  The discussion went on about the age of the person when they get married is about 18 for the girl and older for the man.  If he finds a younger girl he is interested in he will tell his family and they will talk to her family and say they are interested but will wait until she is old enough for the marriage.  The average price that is given is 4,000 riyals and it can go up depending on the family wealth, but it will not be less.  If for some reason the woman wants to get a divorce and is able to prove he is not good or something they will get divorced and she or her family will need to repay 50 percent of the price they were given.
When the group came back I discussed this with them and they asked questions, it was a good conversation. After the visit to the mosque we were rushed to the port for dolphin watching. We drove to the Marina to embark on a search for dolphins and we found them – beautiful coastline and clear blue waters with a variety of fish and other sea life here. 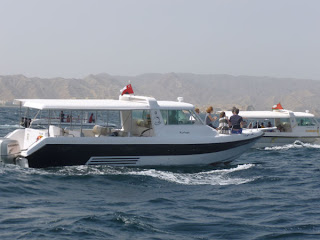 Oman is a blend of the old and new and it has done very well with the architecture incorporating all of this.  While on the sea we were able to see the city skyline and also the rugged mountain range that come right to he city walls. The city builders built right next to the mountains so you have the jagged mountains blended with the Islamic architecture of white stucco buildings.
We went after this to the Bai Al Zubai museum which shows you the traces of Omani history and development.  I remember the first time I came here, it was about 10 ears ago, and there was a small city and the center was near the marina and the fish markets- now it has spread so wide and far, and a bigger population, and new industries.
Took the group to the souk, which is ok but it is mostly run by Indians and Pakistanis, rather than Omanis.  If you have traveled in the Middle East before you will be somewhat disappointed with the markets here – they are not like Syria, Egypt, or even Turkey, but for the first time visitor it is a good introduction to bargaining and seeing the buildings of the covered souks and the small alley ways. There are a lot of different buildings and some old homes inside, and you do need to wander around to see them.
Still one more visit to a hotel before we leave for the airport.  We were invited to the Grand Hyatt and also had a hosted dinner at the property- very nice and upscale.  They tried to incorporate Middle Eastern design and also North African in this place.  They had a meeting of Ministers so a metal detector was brought in to check people at the door, otherwise Muscat is a very safe city and this is not normal to have these in the hotels – first time that we saw this in Oman and also in Dubai and Abu Dhabi.
—————————————————————-
It is 2:30am and our driver and guide are downstairs to take the group to the airport. This is still the old airport but there are plans on the walls of what they are planning to do for a future airport.  The flight is 45 minutes only to Dubai and then you get to this incredible new airport with masses of people from all nationalities and so many different languages being spoken.  It is a huge shopping mall – everything you heart can want is available – almost too much that you just want to find a spot to hang out in and get away from the mobs.
Our flight is almost empty we have only 82 reservations in economy class and a full business class – I decided to spread out on the four middle seats and just sleep. The 15 hour flight to Seattle was not as bad as I thought since I was able to relax.  One of the people in the group mentioned that each flight attendant was more beautiful then the next.  It seems that we are back in the days of PanAm, where you had to be a certain size and look and weight, etc. They were all so pleasant and so accommodating to the passengers.  Also, the trip back had a number of languages spoken – I think it was about 8.  Now to sleep and I will wake up in beautiful Seattle.  I was told it snowed there so I am looking forward to the cold after the heat of the Arabian Peninsula. 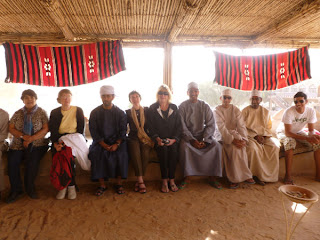