Friday March 9
At breakfast this morning my friend Saeed from Abu Dhabi came by to see me and visit with the group a bit.  It was nice to see him and for the group to be able to talk to a local.  Our guide and driver from Oman were supposed to see us at 8am but they did not make it until 9pm.  It seems the person in charge of passport control on the Omani side was too tired and delayed getting to work.  He did finally show up and they were able to get through and arrive by 9am.  We said our goodbyes, then on the bus I got a call from my friend Saeed – it seems that the driver wasn’t sure of the way out so he gave directions and a tour as we left.  On the phone with him he was giving us a tour and I was translating to the group from Arabic what they were seeing.  The guide from Oman was Paul from Nigeria and he said he was also learning since he did not know these things.  Quite interesting way of giving a tour!
We got to the border and had to do the formalities of leaving the UAE.  The man at the desk was very happy since our group was laughing all the time.  We paid a fee of $10 each and then out the door.  We then drove thru no man’s land for about 5 minutes and got to the border of Oman.  They had just changed the rules for visas on arrival to the country – it used to be $60 and now it is down to $15.  This happened a week ago, so everyone was happy to save a few dollars.  Found out though that they will not take cash in any currency, they will only do credit cards – no debit cards.  So, the guide put this on his card for us and we paid him back.  This is not something they have in print yet so it might be hard for some clients that do not bring a card with them.  The border office opens at 9am, or let me say the people start to come at that time, so we did have a bit of a wait. The banks were closed so no way of exchanging funds.
We finished the formalities and headed on our way to the Jabreen Fort which is closed on a Friday but we could look at the architecture on the outside.  The weather here is so different. Very warm for March – running about 80 F, but a dry heat.  We got to the Jabreen Fort after driving two hours from the border.  The fort was built with bud brick and dates back to 1670.  Beautiful place.  From there we headed for Bahla and then to the date groves of Al Hamra and a short walk to the site of Bait Al Safah. We walked into the date groves for about 10 minutes and got to a beautiful old home made from mud brick.  Inside we had some local women that were making bread, incense, and roasting coffee.  It is a three story old home and each floor had something different.  Some of the women did not want their picture to be taken so then covered their faces and we took pictures of them roasting coffee, etc.  We went to the top floor and had some tea, coffee and dates.  A couple in the group tried some local costumes and we took pictures, and sat in the house and felt how cool it was inside from the weather outside. 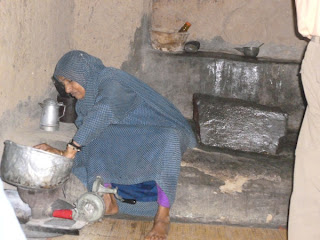 We left here and head for lunch at a small truck stop.  It was interesting in that the waiter and also the owner of the place were all Indians so they spoke no Arabic.  I found an Omani who spoke Hindu and got some local food ordered for the group.  The workers from the kitchen were looking out the window at us so the group decided to visit the kitchen and look at what they were doing.  Everyone was laughing trying to figure out the crazy Americans and everything they wanted to see.  Our guide speaks no Arabic, but the driver Yousef is from Oman and speaks, Arabic and English fluently. 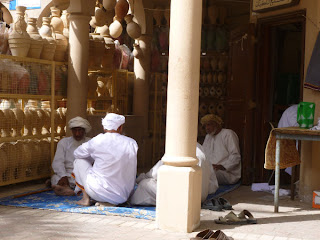 We started the drive to Nizwa and thru the desert and the high mountains to get to our hotel in the middle of nowhere it seems.  This was a good day in that we got the group to the hotel early (5pm) so they could rest and relax since we had been moving for the last couple of days.  Relaxing evening and ready for the desert tomorrow.
previous
Some photos from the tour so far
next
1000 Arabian Nights Camp in Oman