Caravan-Serai Tours
Monday
Today the group had a full day of sightseeing in and around Riyadh. Riyadh is a big city with the problems of traffic and congestion and lots of time needed to get from one side of the city to the other.  We got a great view of the city (and the traffic) from the tallest building here: the Faisaliah Tower.  We took the elevator to the observation deck to see the massive buildings and high rises, all surrounded by miles of flat desert land. The Faisaliah Tower is also a major business center.  As we were getting off the elevator one person in the group recognized the CEO of Mercedes Benz. 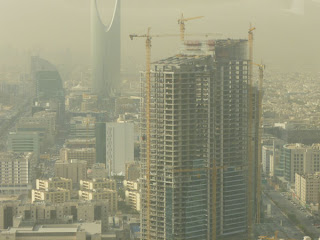 Afterwards we went to the Riyadh Museum, a big place, everything is written in Arabic and English, and spent 2 hours looking at the old sites and also the amount of animals in the area and underwater sea animals and all the artifacts and the work that the Museum is doing in getting back artifacts from countries that had taken them out when they were working on ancient digs here.  They are doing well in that quite a number of items from Britain and Germany have been returned from private collections.
We then went to Masmak Fort and saw a short film on the history of Riyadh, then toured the mud brick structure. One of the ladies had to buy an abaya and another had to have hers shortened which took no time and also cost only about $2 to get it done! 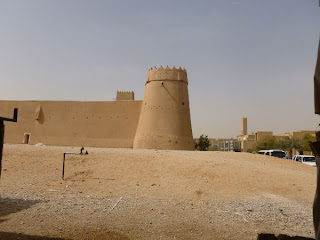 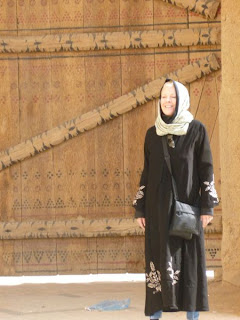 We decided to skip the camel market and instead go to a local festival of culture and heritage that is being held just outside the city, and had just opened two days ago.  The Janadriyah festival is very popular with local families.  The police guards at the entrance were not allowing single young men in, in case they created disturbances. The festival was a great way to see the locals and interact with them.  A number were looking at the group and coming over to us, especially the young girls, to ask where we were from and were happy that we were there. Lots of pictures were being taken by both sides.  We had a group of young college girls that were doing research on why people were visiting the festival, and they started interviewing the group – it was fun for all. 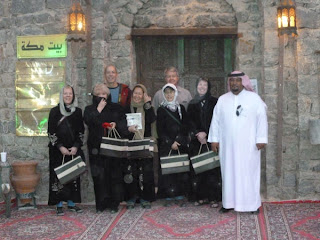 We went to one part where there were men dancing a traditional line dance.  There were replicas of old houses and exhibits on how the great grand parents might have lived. Some of the old homes were similar to the architecture of Yemen. We went to one Mecca house were men were wearing the traditional costumes and reciting poetry.  The group was having their pictures taken by local photographers and then all were given small presents – very nice.  I believe everyone really liked it, even though it was not on the program and they were doing things that the locals were doing.  The newspaper article I read later that day mentioned that 440,000 people had attended the festival within the last couple of days. 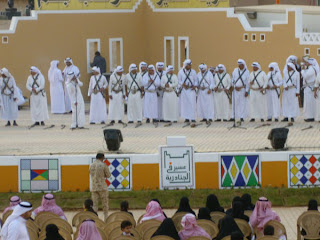 We finished our sightseeing and headed to the airport for our flight to Najran. Arrived in Najran and had four wheel drives vehicles waiting for us to take us to the Holiday Inn to check in. Long day.
previous
Update on #Syria, from Rita
next
Najran, Saudi Arabia