Our History in the Middle East

Caravan-Serai is wholly owned by Rita Zawaideh. She was born in Madaba, Jordan, and immigrated with her family to the United States when she was a very young child. Rita grew up in Seattle, and holds B.A. and M.A. degrees from the University of Washington. In her adult life, she has lived and traveled extensively throughout the Middle East, North Africa, Iran, and Europe.

The history of the Zawaideh clan is fascinating. Rita’s lineage can be traced back to the earliest roots of man in Yemen. Her ancestors were among the first settled tribes to migrate from that area, moving northeast to what is now southern Iraq and later to what are now the modern countries of Jordan and Syria.

The Zawaideh were among the first to convert to Christianity during the time of Christ. They suffered under the Romans, and were part of the Eastern Byzantine Christian Empire that ruled for 450 years from Constantinople (Istanbul).

The Zawaideh clan is one of several clans that make up the Uzayzat tribe, the largest Christian tribe in Madaba of northern Jordan. “Uzayzat” derives from the Arabic verb, “a’azza” meaning “honored, supported, glorified” as they truly were by Prophet Mohammad. The Uzayzat tribe was instrumental in minimizing the losses of the first Arab Islamic confrontation with the Byzantines in the year 630 A.D. The tribe assisted the Arabs in organizing a retreat after a bitter defeat in their attempt to conquer Bilad al Shams (Greater Syria). The tribe, however, remained Christian. For this help, the Prophet Mohammad, who believed in respecting all “People of the Book” honored the tribe and thus it acquired the name, Uzayzat. At that time, the tribe lived around the town of Muítah in southern Jordan and it continued to do so for many centuries. 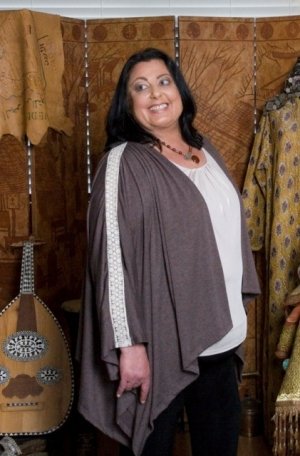 By the mid-19th century, the Uzayzat migrated north to Madaba. There is a story as to the cause of this migration: Near the Christian Uzayzat lived another tribe, the Muslim Sarayreh. A Sarayreh man had fallen madly in love with an Uzayzat woman. They eloped and were married in the Muslim tradition. The marriage of the Christian Uzayzat woman to a young Muslim man was viewed as an insult to the pride of the Uzayzat tribe who could not live with this situation. They therefore decided to move from the area.

The Church gave the Uzayzat land in the northern part of the country at Madaba, an ancient Christian settlement, which had been abandoned and turned to rubble. We might also note that the arid south had allowed only a subsistence-farming life. By migrating north where the rainfall was more abundant, they became very successful farmers of lush acreage.

The new settlement became the envy of nomadic herders – the Bedouin tribes to the east. Bedouin raids were frequently waged for spoils, especially during drought years when they could not find pastures to support their livestock, which were their main livelihood. The Uzayzat tribe continued to prove to be the tough fighters they had always been, and protected the new town with minimum human loss. Several battles were fought in defense of Madaba before law and order was established by the new Hashemite regime that took over Jordan in 1921 following WWI, creating a modern country in the territories. Today, Madaba is a pluralistic society comprised of a diversity of communities living side by s ide with the Uzayzat including Muslim tribes and Palestinian refugees. It is from this city that the Seattle Zawaideh family migrated.

Rita is proud of her heritage and her family’s history. She is currently involved in several projects to help promote understanding and provide educational resources about the land of her ancestors that are independent of her successful tour company operations. But she also shares her pride and extensive knowledge by making the tours she offers not only fun and exciting, but also educational and informative as well. All Caravan-Serai tours are created by a true expert on the region, one whose roots run deep in these cultures, and one who is truly interested in providing an exceptional experience, not just a trip, for every client.

If you would like to assist the critical situation for Syrian refugees in Jordan, please visit our sister non-profit, Salaam Cultural Museum.