Caravan-Serai Tours
Thursday Feb 16
This is a day that was surprising to the group in that they saw so many mountains and hills and we went to one of the tallest peaks in Saudi Arabia, then down to the village of Arijat Al Mara.  There they met a group of young Saudi students that were taking pictures – photography was their hobby.  They started taking pictures of the group, and asking where we were from. A conversation followed of how the west stereotypes the Saudi people – this coming from a young 16 year old.  Their English was perfect.  An old man named Ali, the historian of the city, was there, and he told a story of how he had purchased a camera 50 years ago and wanted to open a photo center in the town, but he couldn’t get all the paperwork together.  He wanted to see if anyone in our group was interested in the cameras.  A member of the group said he should give it to one of the students that were there to see if they might use it or sell it for him.  One student said he would look at it and try to sell it for him on line – Ali said make sure you tell me if you sell it! It was a cute conversation and we were able to connect people in the same area to each other.  He started telling the students about photography and the sun and getting a good picture.
The museum in this place was great they had a room for every thing you could imagine.  One room was called SOCIAL POLITENESS TOOLS – these were tools of torture! 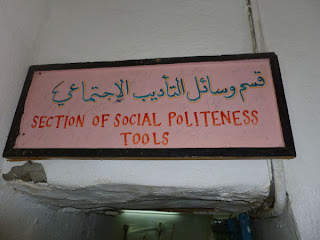 In the afternoon we went to a private museum of Bin Himsan Cultural Village – this is a Saudi man that had studied in the US and came back home, saw the changes and he decided to start collecting and showcasing the cultural artifacts of the region.  It is beautiful, he has done a lot and each year I come he has expanded the collections.  He recently added a photo exhibit of old pictures he has been collecting from the late 1800 to now.  He has a theater where he will bring in performers and also a nice area in the courtyard where you can visit and have some tea and relax and take it all in – similar to the courtyards of regular homes. He has done what I want to do, but he has the money………….
Got back to the hotel for an early night as we have an early flight out tomorrow.
previous
Wednesday: Najran - Abha
next
An eventful day in Saudi Arabia