Caravan-Serai Tours
I have found that a new recommendation we should make for anyone traveling to Jordan would be to read up on Lawrence of Arabia and the Great Arab Revolt when the Arab tribes rose up against the Ottoman Turks in the early 1900’s. A trip to the Desert Castles starts you off with a bit of history of Lawrence and his adventures, but to really get into it you must go to Wadi Rum and see where he and the Arab leaders initiated attacks against the infrastructure of the Ottomans, namely the railway that passes through the desert. 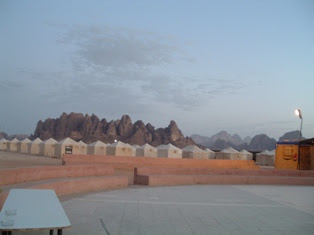 Our tour took us on a long journey from Amman to Madaba, Mt. Nebo, Kerak castle, and finally Wadi Rum and the Jabal Rum campsite. It was a long day, but worth it to spend the night in the camp in the middle of this historic and beautiful but barren landscape. Our camp was actually not too far away from the rail line that was bombed by Lawrence, but is now repaired in use today. We had dinner under the stars- a real Bedouin meal, followed by entertainment and a mock wedding where bride and groom are paraded out and then celebrate the marriage with singing and dancing. This camp is pretty nice as far as camping goes- individual tents with beds, blankets and pillows, a bathroom with showers and toilets! When the sun went down, there were foxes singing to the stars and moon to serenade us to sleep.
Our next day included a tour of Wadi Rum which shows off the beauty of the desert and mountain landscape – not to be missed! We ended up finally in Petra with a full day of sightseeing the next day. I have been to Petra before but it is always a spectacular sight. 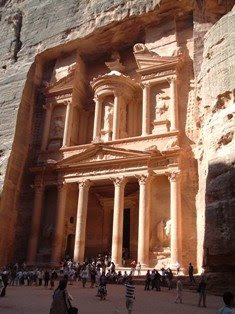 A group of us decided to do the candlelight tour through the canyon and to the Treasury – the whole way is lit by candles and at the Treasury the crowd is entertained by Bedouin music and story telling. The next day when we visited the sight we did the usual horse ride to the entrance of the canyon, then walk the rest of the way to the treasury. A little further on, three of us decided to hire donkeys to take us to the Monastery at the other end of the canyon – something I had not done before. Let me tell you, it is well worth the $20! We rode the donkeys almost to the top of the 800+ stairs, climbed the last little bit and there it was! The Monastery is like the Treasury, but without the crowds. What an exciting trip to ride the donkey up, visit the sight, then walk down to meet the donkeys again to ride them back to the Treasury- it is well worth it because we were able to see a lot in our short time there, and it was just a hoot, any way- but watch out, you have no directional control over the donkeys! They know where they are supposed to go, so don’t try to change their minds!
OK, enough for now. Others are waiting to use the computers, so I better get off this one so I don’t get in trouble! More later about the Dead Sea and Bethany.
Brenda
previous
Levantine Adventure is underway!
next
From the Dead Sea to Damascus