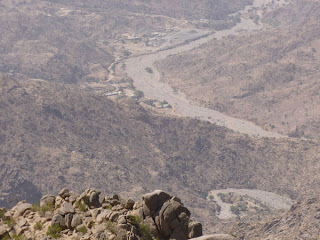 After breakfast this morning we left the city of Najran and headed towards Abha which is 200 kilometers away.  The road started out flat and very desert like and then it changed within an hour to mountain terrain.  We decided to go to the Wadi Farsa which is down in the valley of the Habala mountains.  We spent some time in the old village market run by women. They were surprised to see us and when I spoke Arabic they took me into the tent to ask questions about why we were here and who the other people were.  They would lift their veils – gorgeous women – and turn their faces so the men could not see them.  They would ask me questions to ask the group – what they thought of Saudi Arabia and why they came.  They were not pushing for anyone to buy anything they just loved the idea that we were there.  This is not an area that tourist come to so it was really different for them. They asked why the women covered (wore abayas and scarves over our heads) and I told them out of respect for their customs.  When I said I was from Jordan one woman kissed me and said we were sisters.
In one part of the small market there were people that sell these beautiful flowers and make head pieces with them.  When the group got out their cameras one old lady came out and said no picture! She was so upset, but I explained that we were not going to take picture of the women, but of the men and the flowers. 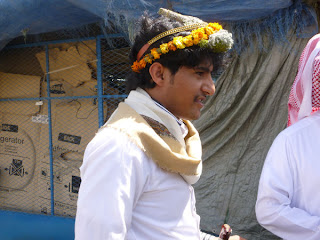 One man came out of his stall wearing a bunch of different flowers on his head and kohl around his eyes.  We got his picture and then I asked if he wanted to marry one of the women – he said yes but he already had two wives and 30 kids! The women in the group said he needed to make her number one and she would marry him.  The people around started to laugh and make suggestions, etc… – a great time.  The police that had been with us during the whole trip as guards also joined in with the jokes. 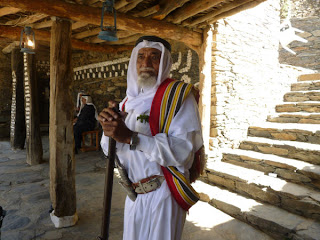 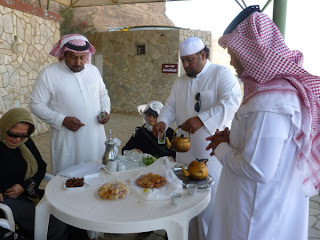 We left and headed out from the valley to go to Al Habala and decided to stop for lunch at a local restaurant that had these small family rooms where we got bbq chicken, lamb and lots of rice on a big tray. It was put on the floor and the group got down to business and did well with the food.  It was excellent.  We left to go to the mountains and take the cablecar across the mountains to the village where the village is on the cliff side, and the people use ropes to get up and down and around on the narrow rock ledges.  I had purchased some sweets and we ate them with coffee (made with cardamom) and mint tea – so nice with the cooler mountain breeze! 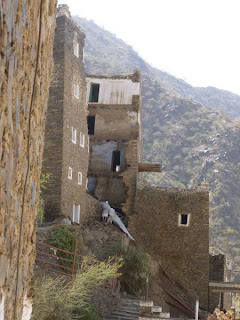 The guides started sharing pictures of their families and we did the same.  Then they started to sing and dance a bit as the group egged them on. We left for Abha before the souk closed and then to the hotel.  As were checking in the fog started to come in and we were not able to see anything in front of us. 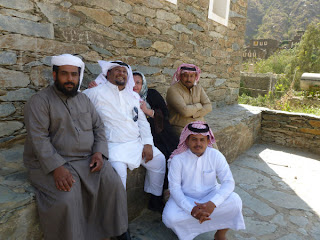